Rule of Thumb, by Scott Baughman is a Sci-Fi adventure thriller, available on Amazon (here).  I met Mr. Baughman on Twitter, and he gifted me a copy of Rule of Thumb for an honest review.

Set in 2042, Rule of Thumb looks at the pervasiveness of technology in our lives.  As social networks continue to grow and permeate our identities, what would happen if we lost access and ceased to exist, according to the civilized world?  Can those in power truly cut us out of society, removing our identity?  Adrien Faulk discovers first hand the dangers of such a world in this Sci-Fi adventure. 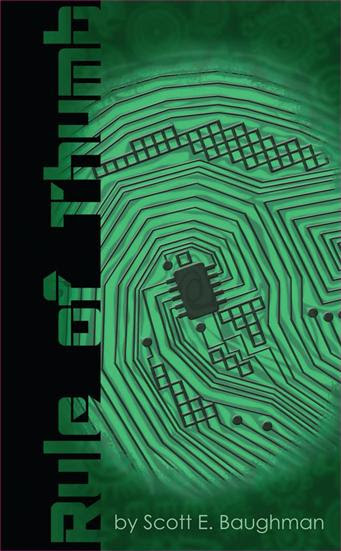 Mr. Baughman does a wonderful job creating a believable near-future.  The first two chapters of Rule of Thumb sucked me right into his world.  He introduces us to Smith, a detective Mr. Faulk hires to help retrieve a lost item.  Mr. Smith prefers the "old" technology of the early 21st century, as a great contrast to the new technology of 2042.  Smith still reads the New York Times (on paper!), dines on unhealthy greasy foods, and drives an old gas powered Mustang.

The back and forth banter between Adrien and Smith helped explain the differences (both subtle and distinct) between present and future.  Their contrasting world views setup the story, and keep it moving forward.

What begins as a simple mystery of a lost family heirloom turns into an international adventure full of conspiracy, action, and intrigue.  The story flows quickly from scene to scene and does not waste any time on long exposition.  It is a quick read throughout.

The book is written in first person perspective, which I must admit is difficult for me.  I follow along first person stories just fine (and Mr. Faulk's thoughts are detailed and easy to follow), but often I find myself annoyed with the main characters of such books because I know too much of what he or she is thinking.

That said, the book is well written and easy to read.  I noticed very few, if any, typos and the formatting is clean and painless to navigate on an e-reader.  The author's clear and direct prose never confuses and keeps the story moving without hiccups.  It seems to me appropriate effort went into proofreading and editing the work.

I most enjoyed reading the author's version of future New York.  The people and technology of the high speed, high tech world are well defined and believable.  By the end of the second chapter, I was ready to settle into an urban thriller.  I must admit, I was disappointed when the story took a turn and left New York for more of an international adventure.  I hoped for more of Mr. Baughman's version of the city.

At times, the pace of Rule of Thumb races along.  I feel that the author has too many story elements for this books 140 pages.  Without giving the story away, the final third of the book contains several twists and revelations.  Before I could digest and come to terms with each one, the next showed up.  After reading the story, I feel there were a number of plot points and reveals that could be saved for later books in the saga.

After reading Rule of Thumb all the way through, I get a sense that Mr. Baughman knew where he wanted his characters to go, but did not always know how he wanted to get them there.  There are a couple scenes in the book that drive the story forward, but the characters end up surviving unbelievable situations to get to the next scene and location (particularly evident on their trip to South America)  These scenes felt like short cuts, and shook me out of the story for a time.

I believe the story and characters would be better served taking a longer path.  This reinforces my belief that there is actually more than one book possible with this story (or a longer, more epic book perhaps).

Rule of Thumb is jam packed with action and surprise twists and turns.  Mr. Baughman's world of 2042 is believable, dangerous, and compelling.  I recommend Rule of Thumb for anyone looking for an imaginative, futuristic action-adventure tale.  I am excited to see where Mr. Baughman takes the story next!

You may have noticed there are no purple dragons here.  As I evaluate the point of my reviews and what I hope to accomplish with them, I realize a rating system is not the right way to go with Ryndaria.com.  In my post next week I will explain in more detail why I do indie reviews and why I think ratings won't be as useful as I would like them to be.  This is not to imply that Rule of Thumb does not deserve the coveted dragons.  It was a very fun read.  :-)